Anija Manor is located 30 minutes’ drive towards Narva from Tallinn, along Piibe Road, under ancient trees

Anija Manor is located 30 minutes’ drive towards Narva from Tallinn, along Piibe Road, under ancient trees. The actor and director Andrus Vaarik once said that Anija Manor is the most beautiful crumbling country manor. While the manor is no longer as crumbling today, Anija manor is still beautiful, enchanting, and charming in its simplicity.

Anija Manor presents the story of the time of manors through experiencing the simple nature of the manor house. The manor presents history and culture through sense experience, telling stories about what is really important in life, the charm that lies in simplicity and cosiness.

The first reports of Anija Manor at its present location date back to 1482, when it belonged to Hermen Soye. The Soyes built the centre of their domain as a stone fortress, or a vassal fortress. Some of its walls are still in the cellar of the present manor house, some of them (with the remnants of a rare hypocaust furnace) were uncovered in the autumn of 2012.

Anija Manor was named after the small river Hanijõgi (Goose river), which flowed from a small bog lake in the southwest of the manor to Jägala River. The Anija municipality coat of arms depicts geese still today.

At the end of the 17th century, the manor was leased by various families (Holstein, Fresen, Knorring, Lantinghausen, etc.). The main building was a two-storey prominent stone building. It was probably a partitioned building of the medieval fortress.

After the Great Northern War, the manor was returned to the Staël von Holstein family. The two-storey late baroque manor house that has survived to this day was erected at Anija during the ownership of Matthias Georg Staël von Holstein in 1796 – 1802. The main floor of the hipped roof building is the first floor. The building facade is sectioned by pilasters. Elaborate stucco boards adorn both the facade and the pediment that spans the width of three windows on the back side. The building also has an intricate front door characteristic of early classicism. 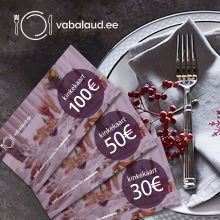